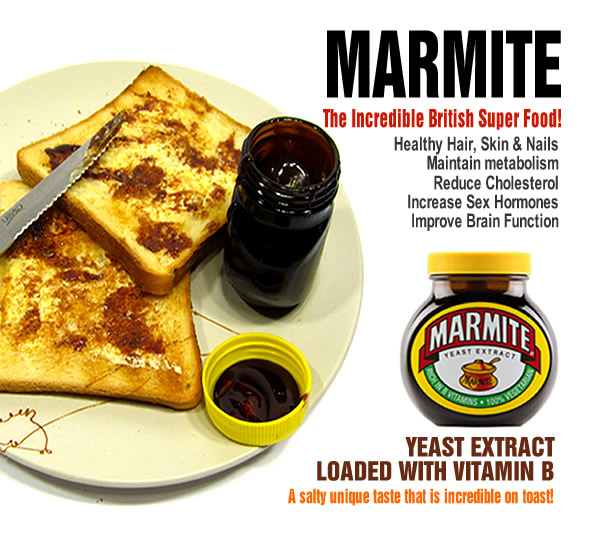 If you are British or a member of the British Commonwealth, you are bound to be familiar with Marmite. A yeast extract loaded with Vitamin B.  It contains no sugar, no preservatives or coloring. It looks like black tar and has the same consistency. Meaning it’s a sticky, dark brown paste with a unique taste and powerful flavor.

Marmite was invented in the late 19th century when German scientist Justus von Liebig discovered that brewer’s yeast could be concentrated, bottled and eaten. But the British popularized it. It’s extremely salty and has a slight bitter taste. Five teaspoons of Marmite has 1035mg of sodium, representing 43% of your Daily Value. But don’t let that sodium scare you, because you would never eat 5 tsp. of Marmite. You eat one, maybe two teaspoons at a time. It’s that strong!

The taste of Marmite is something very special. It is however an acquired taste that Americans in general don’t like. They should, at least to get away from the sugar laden foods they consume to their own detriment. In fact the taste is controversial even in Britain, which is why it is often marketed as “ Love it and hate it “. The trick is to use very little and either mix it with other ingredients or spread it very thin, like on toast. It’s like salt. On its own, salt is just horrible, but when mixed with food is  just heavenly. Ditto for Marmite!

Marmite is something any British family will keep in their pantry. For that matter virtually any house in the former British empire. Whisked out especially when they are feeling sick or down. Usually a teaspoon of marmite and lemon juice is mixed with a cup of hot water and sipped with a piece of toast. If you are throwing up and just feeling, blue marmite works wonders. Others prefer to spread a sliver of marmite (about a ½ teaspoon) on buttered slice of toast and eat it that way. Nigella Lawson, the British chef did a wonderful Spaghetti with Marmite recipe. Marmite goes with everything and there literally hundreds of recipes you can use marmite on. There is even a Marmite Facebook page if you want to visit it.

Does it have any nutritional benefits you ask? Let’s put it this way. A serving of Marmite (about a 0.84 of a teaspoon of Marmite or 0.14 oz.) has about 60% Vitamin B12, 36% Riboflavin (B2), 17% Niacin, 18% Thiamine (B1) and 8% Sodium. Vitamin B12 serves an important role in maintaining brain and nervous system function. Riboflavin is an essential vitamin needed to maintain metabolism and protects your body from free radicals, meaning cancer causing cells. Thiamine is a vitamin used to keep your hair, eyes, skin and liver healthy. And Niacin is plays an important role in energy production, reducing cholesterol, reducing fatigue, increasing your sex hormones and blood flow to genitalia and maintaining healthy hair, skin and nails. So yes, Marmite is very good for your health. Which is why it is very popular in the developing world. It’s cheap, has no preservatives, can be kept unrefrigerated and just a teaspoon delivers a powerful nutritional benefit. That’s why it’s the best food to keep for a natural disaster like an earthquake. Just think, a teaspoon of Marmite on some toast is enough to cure half your problems. Buy a bottle of Marmite and eat 2 teaspoon once a week. And give it to your children. They love the salty taste.Just a teaspoon is enough for two pieces of toast. Don’t over do it.

The best place to buy Marmite is an Indian, Sri Lankan, South African or Australian grocery store anywhere in the world store. Or you can order it online. Buy it and save your health.