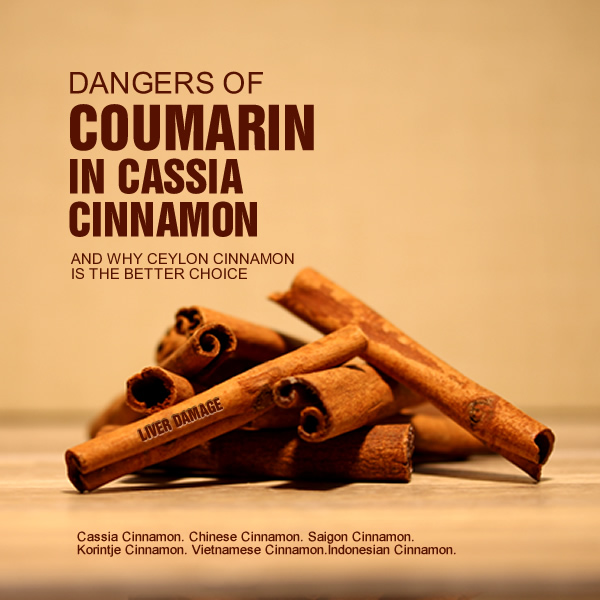 Coumarin is a toxic, fragrant chemical compound commonly found in high concentration in Cassia Cinnamon, the cheap hard Cinnamon sticks you find at your local grocery store. According to the German Bfr Coumarin causes liver damage. While the effects are apparently reversible according to them, the danger is still very real  if you are a especially sensitive person. Studies in rats have also found that Coumarin in very large doses over long periods of time did provoke cancer in rats and mice, although there is no evidence it does the same for humans.

Coumarin is also contained in a number of other products, most notably in Tonka beans, Vanilla grass, Sweet Woodruss, Mullein, Sweet grass according to Wikepedia. The name Coumarin comes from the French for Tonka bean, which is coumarou.

Interestingly while Coumarin is banned in the United States as an additive or as constituent of Tonka beans, Coumarin in food from other natural sources such as Cassia Cinnamon is not regulated. Is this a huge error on the part of the US Health authorities?  When you consider the huge amount of Cassia Cinnamon consumed in the United States and the fact there are 30 million cases of liver disease you start to wonder. Have you been eating quite bit of Cinnamon Toast Crunch or Cinnamon Toast Waffles? Perhaps now is the time to switch to Ceylon Cinnamon, which has less than 0.02% Coumarin while Cassia Cinnamon has in the region of 0.4 – .8% which is considered damaging to your liver at this level.

The European Food Safety Authority (EFSA) established a tolerable daily intake (TDI) of 0.1 mg/kg body weight according to this University of Mississippi study of April 2013. Partly funded by the FDA and efforts of Ananda Wickramasinghe, the former Sri Lankan consul general in Los Angeles, this latest research project has exposed the hidden dangers Coumarin.

The German government was actually the first to raise alarms about the level of Coumarin in Cassia Cinnamon in 2006. According to this opinion report by the German Bfr, published in September 2012, they say :-

The University of Mississippi report goes onto look at Coumarin content in various common food products available in the United States, and found high levels of Coumarin,. Of particular concern was the Coumarin levels in Cinnamon dietary supplements, which is astronomically high. If you are taking Cinnamon on a daily basis, then there is the real possibility of Coumarin build up your system, even if your daily intake does not exceed the maximum levels. The chart below shows a brief extract of the research project, but take a closer look at the full report for detailed information.

Even if you switch to Ceylon Cinnamon for your capsules, we feel that ingesting Cinnamon capsules does not represent a good choice because of the inherent danger of their production methods. (Click here for more information on the dangers of Cinnamon capsules).