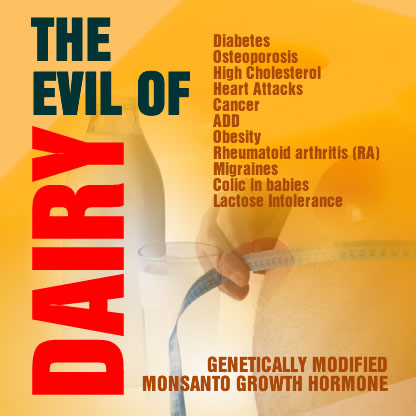 Let’s get one thing clear. I am not advocating you give up dairy foods entirely. Although you should because dairy production in the United States is tainted, genetically modified, infused with growth hormones, over produced with our tax dollars and consumed far beyond reasonable levels.

US Dairy consumption is an incredible 604.5 lbs. per person as of 2008.  We have a gigantic dairy over consumption problem in the United States. This is because of a perverse system of government programs, incentives, and subsidies that has led to the over production of dairy products. That’s why we are bombarded with advertisements for milk and other dairy products.

Dairy is in everything. You simply cannot go anywhere without consuming it. It’s in our Cereals, Bread, in the hamburger,Salad, Milk Shake, Pasta and Pizza. It’s in snacks, it’s in Mayo, Sour Cream, Yoghurt and it’s in drinks including probiotic drinks that we down with gusto.

Relentless marketing has conditioned parents to give their children Milk or Yoghurt to build their bones, when in fact they may be condemning their children to a life of disease including obesity, diabetes and heart attacks. You don’t need to drink Milk to get your Vitamin D or Calcium. A reasonable amount of sunlight (5-30 minutes) or other foods can give all the Vitamin D you need. Visit this USDA web site to get alternative sources of Calcium.

You need to cut out dairy completely from your diet. Have a look around and take stock of all the dairy products in your house. You will find quite a bit of it.  And in case you are not convinced here are 12 SOLID reasons why you should avoid American Dairy products.