This is the ultimate list of the 12 best spices of all time in the World.  Keep in mind these are spices and not herbs. Spices comes come from roots, fruits, seeds, flowers or the bark of a tree while herbs come … Continue reading →

Ask almost anyone which is the scent of Christmas and the top answer will be Cinnamon. Ironic considering that true Cinnamon comes from the tiny tropical Island of Sri Lanka, a World far removed from the Christmas tradition of the … Continue reading →

Are you a frustrated Gardner dealing with a whole army of pests? This homemade Natural Cinnamon Oil pesticide formula will solve all your problems. Well 99% of it. The only place where you shouldn’t use it is where you want … Continue reading → 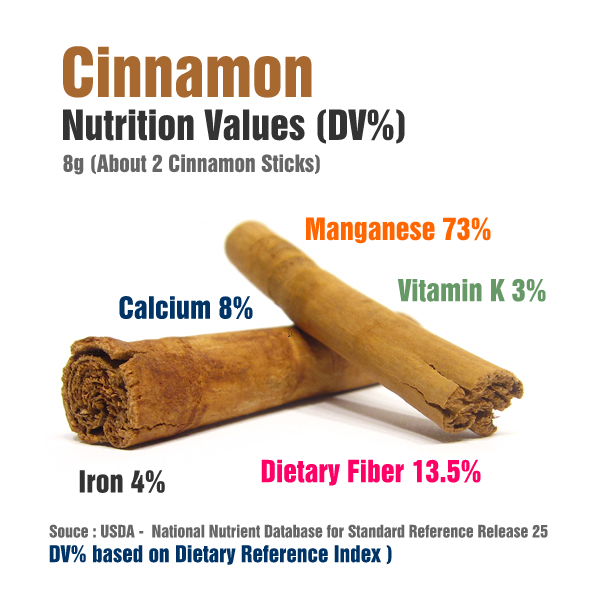 Most people get confused about vitamins and minerals. One cause for this confusion steps from the different standards such as the RDI “Recommended Daily Intake” and RDA ” Recommended Daily Allowance.”

The Reference Daily Intake (RDI) is the value established by the Food and Drug Administration (FDA) for use in nutrition labeling. It was based initially on the highest 1968 Recommended Dietary Allowance (RDA) for each nutrient, to assure that needs of 97-98% were met for all age groups. This does not mean these values are the highest levels of any vitamins and minerals you can take. And nothing will happen if you exceed these dosages. Of course you must not confuse clinical dosages with normal dosages.

The RDAs were established and periodically revised by the Food and Nutrition Board. Value shown is the highest RDA for each nutrient, in the year indicated for each revision.

The Dietary Reference Intakes (DRI) are the most recent set of dietary recommendations established by the Food and Nutrition Board of the Institute of Medicine, 1997-2001. They replace previous RDAs, and may be the basis for eventually updating the RDIs. The value shown here is the average DRI for ages 4-70 years of age.

The RDI is used to determine the DV% (Daily Value percentage) that you see on food labels. The DV is the dietary reference value displayed on food labels, So the DV is a percentage and the RDI is total amount in milligrams or grams. 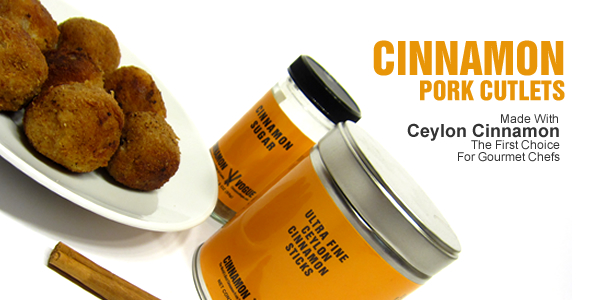 This Cinnamon Pork Cutlets recipe is adapted from the classic Sri Lankan Fish cutlet, which is a delicacy beyond compare. In this case we create a fusion of Pork, Cinnamon and Ginger to create an astounding flavor combination.

These cutlets do not have an overtly cinnamon smell or even taste. Sri Lankan Cinnamon tends to be sweet. It has a complex flavor that never takes center stage.  It’s role in this recipe is to create a more sophisticated flavor from the  fusion of pork, ginger, pepper and garlic. Fresh ingredients are a must,  An exotic taste that has hints of everything yet comes to together to create a unique sophisticated taste of it’s own. That is what separates an ordinary cutlet from the truly extraordinary. The magic is on the inside.

To make this requires patience. I would suggest sipping a glass of chardonnay. But not too much, because it also requires concentration and attention to detail. And you should never be hungry when you do this because you will end up eating it as you go. Just sip the Chardonnay  Create a good work space, have all the ingredients well prepared and follow the instructions to the letter. Deviations can be costly. First time we did this we drank too much Chardonnay, messed up the ingredients and burned the cutlets.

Serve the pork cutlets with Ketchup or far better with Mrs. Balls Chutney, a South Africa chutney that is just superb. If you want you can add some extra chili to make this cutlet a bit hot and then compliment it with a glass of Cinnamon Tea with sugar or honey. The hotness of the cutlet and sweetness of the Cinnamon Tea creates a wonderful taste sensation.

Note: Ideally you want to use a mini deep fryer for this. That way the cutlets fry perfectly  with a lovely golden brown color and burning scraps of bread crumbs from the previous batch won’t stick to the cutlet.  I found this deep fryer from Cuisinart which look pretty good.