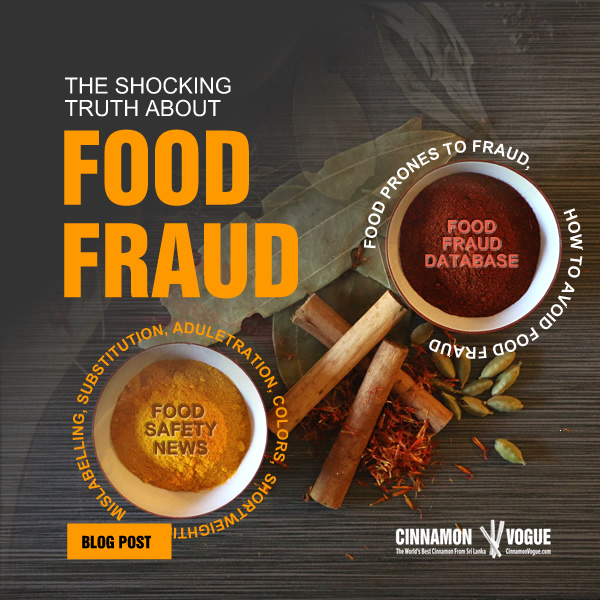 With the advent of the internet and the complex global supply chains, food fraud has become a huge issue. Chinese mothers now shop online in Europe and the US, after melamine tainted milk killed six infants in China. In Europe there was the horse meat scandal which horrified consumers. In the US the New York State attorney General’s offices accused major retailers of supplement fraud according to this NY times blog post. There is much more food fraud in the United States, both legal and illegal than one imagines. Certainly no less than in developing countries.  Just like corruption, food fraud is far more sophisticated in the USA. But it exists on a significant scale.

IT BEGINS WITH OUR OWN STORY WITH FOOD FRAUD

What started our own investigation was a unscrupulous competitor.  This company (organic wise) started by copying our product descriptions for their Amazon listing. Verbatim. Without shame. We begged Amazon for months and they did nothing. Finally they changed. Just a little. We kept up the pressure on Amazon until they changed it more substantially.

Still we were suspicious. They had amazing reviews and lots of it. In a very short period of time. We called the USDA and checked.  They could not find any record of this company, but suggested maybe they were under another company name which did the importing and packing. We were quite astounded. Shouldn’t the USDA have some kind of trace-ability? Our USDA organic Ceylon Cinnamon powder is packed in Sri Lanka under the certification of Control Union which is one of two licensing bodies for the USDA. As part of the certification process we had to put the USDA number of our partner supplier in Sri Lanka on the label. They were tough on us.

This was frustrating because this seller, Organic Wise did not put a USDA organic number on their labels. So there was no way to check this. Then they put up a separate website of their own (apart from Amazon) and again continued to use our word descriptions on their site. But that gave us an opening and we traced the company ownership to an Indian guy based in Vancouver Canada operating under the name life Consumer products LLC, In the meantime we saw some of the reviews on Amazon mentioning the alleged Ceylon Cinnamon powder from organic wise was Cassia Cinnamon and not Ceylon Cinnamon.

We went ahead and tested the organic wise Ceylon Cinnamon by the Sri Lankan government testing labs. The report is here. It shows coumarin levels at 0.18 w/w which suggests it is most certainly Cassia Cinnamon. Ceylon Cinnamon will never exceed the range of 0.002 to 0.004.w/w. We show the test results for our own powder here. NO, we did not open the organic wise bag and put in Cassia Cinnamon. The bag was delivered unopened to the testing labs. Don’t take our word for it. Get it tested yourself. There is a good lawsuit here. 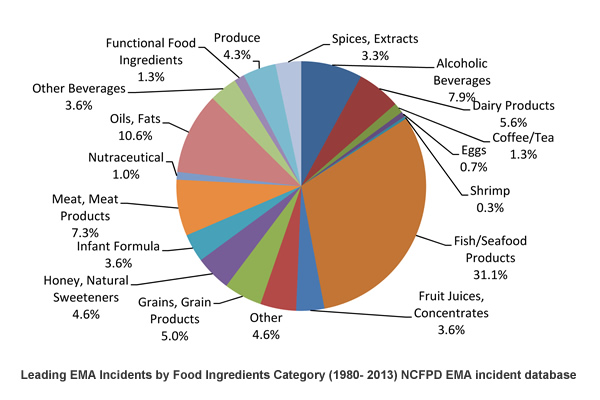 Wish there was a database of food fraud offenders we thought. Fortunately now there are two organizations, foodfraud.org and foodfraudresources.com that do that.  They are  beginning to address this issue of food fraud.

With Cinnamon Oil the deception can take many forms. The first method is to cut Cinnamon Oil with another substance like alcohol or an artificial flavor or to use Cassia Cinnamon oil which is cheaper. The second method is to sell lower quality Ceylon Cinnamon oil. For example the primary ingredient in Ceylon Cinnamon leaf oil is Eugenol. The higher the eugenol content, the better it is. Anything above 75% is very good quality.

Interestingly there were also a few cases where cinnamon was adulterated with coffee husks. Don’t believe us? Open an account and find out. We are beginning to believe there are many people selling fake Ceylon Cinnamon Powder and Ceylon Cinnamon Oil too.

Fish & Seafood
I visit a Chinese fish market which has Wild caught Salmon for 6.99/lb, which seems suspicious. Fish is one of the most fraud prone food groups. Worse it is tainted with pollution and chemicals. Here are few of the common methods of fish fraud.

Livestrong has a list of 13 fish types to avoid in this handy chart. Worth a look. I do like my King Mackerel but it is not recommended due to high levels of Mercury. And it says to avoid grocery store Tuna Sushi rolls and seafood trays due to treatment with carbon monoxide. Yikes.

Olive Oil
Did you know that much of the Italian Olive you consume does not actually come from Italy but from Spain which is one of the largest producers of Olive Oil in the World? This NY times diagram explains it beautifully. According to the article 69% of imported Olive oil labelled “ extra virgin “ did not meet the standard for that label. Worse many of the Olive oils have been adulterated with Soybean Oil, walnut oil, Canola Oil common from Italy to Brazil.

Dairy Products
Of all the milk products, cheese is the most prone to fraud. Many have outright substitutions like replacing Parmesan cheese with Havarti, Swiss cheese, white cheddar or Mozzarella. At other times it is potato starch, cellulose imitation cheese or aged less than 12 years. The USDA raided Castle Cheese in 2012 and found cheese being adulterated with a wood pulp. According to Neal Shuman, CEO of Arthur Schuman icited in this article Cheese is frequently mislabeled, they don’t taste right or they mislead consumers and foodservice customers.

Meat Products
Of all the products, meat is probably one of the most dangerous when subject to fraud. The most famous scandal was in Europe where horse meat was sold as beef. The probability increases with processed meats where chicken for example is used instead of Duck meat or Pork instead of beef. The US meat industry has been fraught with huge sanitary issues on top of fraud issues. Another common practice in the US is the use of Carbon Monoxide to keep meat looking red according to this article. This has put me off meat. Maybe we should all go to a Jewish Kosher meat store from now on but that is no guarantee either. According this article Anhydrous ammonia is added to meat products which creates other issues.

Honey
Americans consume about 1.3 lbs. per person per year. With such demand, over 60% of honey is imported and ripe for fraud. The most common adulterant? Sugar of course and plenty of it. Read this fabulous story of how adulterated cheap honey was imported from China by a German company. Some of the honey was adulterated with rice sugar, molasses, or fructose syrup. It makes you shudder but the two main employees went to jail.

Read this excellent source from wisebread which goes onto explain how Chili powder and Turmeric can often be dyed with Sudan die. Other examples include Barium Sulfate instead of Paprika, artificially colored fennel seeds instead of real Cumin. A common trick is to mix dried Papaya seeds in pepper. It looks so similar people would not notice it especially if only 20% of the contents are fake.

This natural news article warns of the same issue with fake Ceylon Cinnamon and warns “While these impostors might be more flavorful and acceptable to the modern palate, these cinnamon substitutes are much cheaper to produce, and are not as medicinally potent as the real thing. This independent article cites a British study which found that 25% of Oregano was fake.

Generally speaking the more expensive the spice, the more it is susceptible to fraud, especially spices like Saffron which is horribly expensive. Since many spices come from Asia, watch out. India in particular has a really bad reputation for selling fake spices as this article illustrates.

It is always best if you can buy spices whole and grind them yourself. If you are buying powdered spices, buy it in good quality sealed light proof containers. This will keep the spices fresh for much longer than those glass bottles found at the supermarket. Also consider getting sealed spice jars. We thought these jars and bottles from infinity pretty impressive with ultra-violet filtering and air tight seals.

Coffee and Tea
As natives of Sri Lanka we know tea and what quality means. But the potential for fraud is extremely high. Not with fake ingredients per say but with lower quality Tea. Ceylon Tea is acknowledged to be the best in the World. Many well-known brands therefore mix a little bit of high quality Ceylon Tea with cheaper teas from Africa and India to make a blend that is acceptable. Of course this is not fraud but there are low level suppliers who mislabel the geographic origin of the Tea or worse have added things like saw dust, starch, china clay, copper salts, Japanese star anise and even iron fillings.

By comparison Coffee seems far more susceptible to fraud, with fake Colombian Coffee or the addition of other ingredients like Coffee husks, Barley, Chicory, Malt, Figs, Cereals, Caramel and Starch being the most common practices.

The Washington Post reports substitution of Robusta beans for expensive Arabic coffee.  Read this very interesting story about Cambodian Coffee which turns out to be soybeans and scorched corn. This report from the National Chemical Society found that ground coffee could contain all sorts of filler ingredients, from barley to wheat. Maybe better to stick to Starbucks even if it is expensive and you disdain going there. Better still, stick to a good cup of Ceylon Cinnamon black Tea. Sorry we could not help making a plug for our own Tea.

Fruit Juices
Fruit juice fraud in our opinion falls into two categories, legal and illegal. Those 100% juices are not really 100%. After the juice is squeezed, they extract the oxygen out of it so it keeps longer. And then they add some orange derived flavor packs to the juice. They process is far from natural according to alternativedaily due to the chemical process involved  So it is also far from real. To call it 100% pure is quite misleading.

But the second variety of fruit juice fraud is far more insidious. This involve replacing one type of juice for another. Like putting in Apple juice with some flavoring to make it taste like Pomegranate. But there are also second tier orange juices that are much worse. These are consumed disproportionately  by the poor who have no knowledge on what goes into these so called juices.  In addition to corn sugar or high fructose corn syrup they have been known to put lemons, grapefruits, beet and all manner of juice by- products, into the mix. The flavor is then enhanced, stabilized and protected by additives like potassium sulfate, and ascorbic acid. If you go to a dollar store you will  often see many products like this.

Nestle was issued warning letters  by the FDA for Juicy Juice because the product label implied that the products are 100% juice when they are actually juice blends with added flavors. Similarly Tropicana Juice has faced lawsuits over false advertising claims. People are now realizing your simply cannot buy 100% juice. Only you can squeeze 100% pure juice.

The problem becomes worse when you buy imported fruit juices. In this example China’s largest fruit juice manufacture was caught using rotten fruit to make juice. There is also the danger that many of these foreign imports have high levels of pesticide in them.  We have seen hundreds of these juices in many ethnic stores and it makes you wonder. 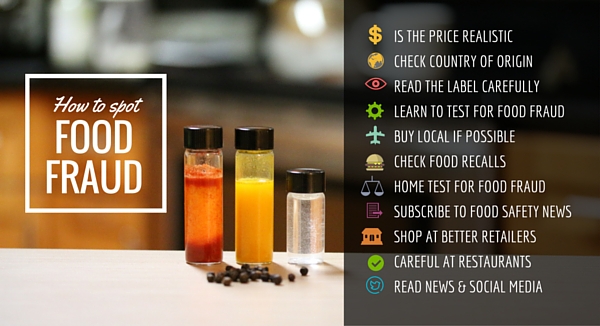 HOW TO SPOT FOOD FRAUD

There you have it. Is your Ceylon Cinnamon genuine? Has it been adulterated with brick powder? Is the company you are dealing with, genuine and receptive to questions? The best you can do, is to be aware, whether you buy fish or dairy products. Expensive does not necessarily mean good quality. Many well-known retailers have got caught selling fake stuff whether by mistake or not. You have to dig a little deeper.