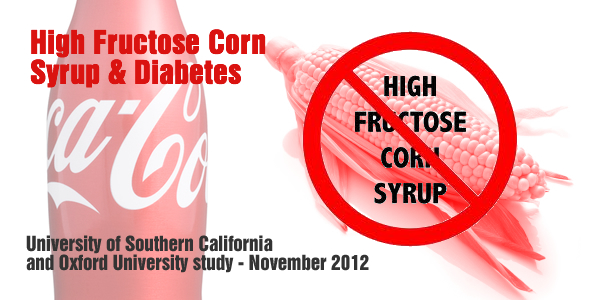 According to a research study by researchers at the University of Southern California and Oxford University, there is credible evidence that High Fructose Corn Syrup (HFC) and diabetes are interlinked. The researchers looked at 42 countries worldwide and found that people who used HFC have a 20% higher chance of getting Type 2 diabetes. I am convinced it is actually much higher. After fighting a losing battle for Prop 37 and the right to have GMO’s labeled as such, here is more evidence that we cannot possibly trust what American corporations or even the government tells us.

As someone who owns a couple of preschools in addition to a Ceylon Cinnamon company, I have seen firsthand what High Fructose Corn Syrup does to children. I became aware of HFC about 8 years ago because the children in my schools were out of control. They were often erratic, obese, violent, had poor concentration, and were hyperactive.

After reading about the dangers of HFC, I decided that was it. No high fructose corn syrup in my school. To me, sugar was not the cause per se, although excess sugar in processed foods is a huge problem. It was the HFC. The evidence was compelling. So I decided to strongly discourage the use of HFC. I shamed the parents. Got into downright fights over it. And the results were very effective. I got far better behaved children. The results were actually quite spectacular. And the odd child who was badly behaved was inevitably loaded up on HFC. And obese to boot. Their parents just didn’t give a rat’s ass!

Type 2 diabetes has become an epidemic worldwide. Mexico which had 2 million cases in 2000 has 10 million cases in 2012. Especially since import restrictions on HFC was lifted in 2008. It has even overtaken the US in the rate of diabetes. Chiefly because it has copied its neighbor to the North in what it eats. Processed foods laden with HFC. And abandoned all those foods that kept them safe for decades. Like Ceylon Cinnamon infused recipes like Te de canela, well known to control blood sugar levels and maybe even prevent diabetes.

The evidence is very clear. The more sugar you take, the higher the rate of diabetes. If you take HFC you increase your chances of getting diabetes by another 20%. Maybe we should adopt the Chinese way? Have you noticed that the Chinese really don’t have a sweet tooth? Ever heard of a Chinese dessert recipe? And they drink a lot of tea to wash down and digest all the food. Maybe a two thousand year culture can still  teach us a few things?! Before even they, like the Mexicans, succumb to the disease of the United States.